After a year of disheartening setbacks, many activists and change-makers may feel that the critical goal of transforming capitalism is slipping out of reach. Yet, having just returned from a four-week trip to many sites and gatherings working on social, economic, and spiritual renewal, I feel that the opposite is true. There are more fascinating and eye-opening examples of this transformation emerging worldwide than ever before. But something is missing, something that contributes significantly to the sense that we’re heading in the wrong direction. Simply put, what’s missing is a systemic connection between all these initiatives—an enabling mechanism that allows us to not only connect the dots, but also to see ourselves, and the significance of our work, from the whole. Below, I take you on a tour through the landscape of some current initiatives, and at the end of this journey I propose how we might link up and support the larger landscape of economic transformation.

In previous columns I have described our current moment of crisis—specifically the rise of Trump, the far right, and populist strongmen—as the result of two factors: (1) the increasing rate of disruption and (2) the lack of a capacity to lean into these moments by letting go of the old and letting come new patterns and possibilities (a capacity I call presencing).

At the heart of our current predicament is a disconnect between the real-world challenges—the widening ecological, social, and spiritual divides—and the outdated economic models we use to respond to them. Closing that gap will require nothing less than a transformation of the economy. The transformation of our current mode of capitalism is the key to any sustainable strategy for social-ecological change. It is as true for the United States as it is for Europe, Asia, Africa, or Latin America.

So what have we learned, if anything, about transforming our economic order? Last week I attended a meeting convened by the DOEN foundation in Amsterdam that brought together key innovators in the field of forging a new economy. It was a wonderful microcosm of change-makers from many countries and sectors, each of whom is pioneering new pathways. This column is much inspired by that meeting.

The term “new economy” was frequently used during the heyday of the dot-com bubble. It suggested a new set of rules that would replace the traditional rules of the “old economy.” Today it no longer refers narrowly to digitization but more broadly to addressing the bigger social, environmental, and cultural-creative challenges of our time. So perhaps the term could be used more precisely to speak about transforming capitalism toward an economic system that generates well-being and prosperity for all—all beings, human and non-human, including current and future generations.

The essence of transforming capitalism—or creating a new economy, if you prefer that term—is often missed or overshadowed by activities that happen under the headline of pursuing corporate social responsibility. These are worthwhile efforts, as are many of the sustainability-related activities undertaken by business. But a true transformation must deal with an essential design flaw in the core architecture of capitalism.

In his 1944 book The Great Transformation, political economist Karl Polanyi describes this design flaw as commodity fiction. Capitalism, or the market society, as he calls it, is constructed on the foundation of a fiction—namely that nature, labor, and money are commodities; that is, they are produced for the marketplace and for consumption. But, Polanyi argues, nature isn’t produced by us for market consumption. Nor are human beings (labor). And neither is money. But in the market system they are treated as if they are commodities. That’s what he calls commodity fiction.

The result is, according to Polanyi, phenomenal growth on the one hand, but also disastrous negative externalities in the form of environmental destruction, poverty, and cyclical monetary breakdowns. Societies responded to these dysfunctionalities by creating a whole new set of institutional innovations such as standards for labor and the environment, social security, and the federal reserve system—all of which do basically the same thing: suspend market mechanisms where they are not useful.

Using 19th-century England as an example, Polanyi describes the dysfunctionality of early-stage laissez-faire (free-market) capitalism and how society responded by updating the economic operating system with a new set of institutional innovations.

Today, more than 150 years on, we find ourselves again confronted with a set of externalities—this time global ones—that again require us to update the economic operating system in ways that make it a better fit for the challenges of our century.

The good news is this: the future is already here. As was clear at the DOEN gathering in Amsterdam, a whole ecology of intriguing experiments that put new economic concepts and ideas to work already exists. Some of them concern eco-system restoration. Others address the circular economy and the implementation of cradle-to-cradle design principles in the world of business. Still others experiment with complementary currencies that foster local well-being and prosperity. Others campaign for changing the tax system. And still others focus on the interface between economy and society, on the question of basic rights for planet earth, or on new media platforms for amplifying and sharing the emerging narrative of the new economy.

There are so many fascinating and eye-opening examples and stories. But what’s missing? What’s missing is a systemic connection between all these initiatives. They are often grown and implemented in silos because there are no shared platforms, coordination mechanisms, or shared mental maps that make visible how all these initiatives can be linked to support the larger landscape of economic transformation.

The Emerging Landscape of Economic Transformation

Today we can see an emerging landscape of at least seven acupuncture points that, if focused on simultaneously, would allow us to fully update the economic operating system by shifting it from an ego-system to an eco-system mode of functioning. 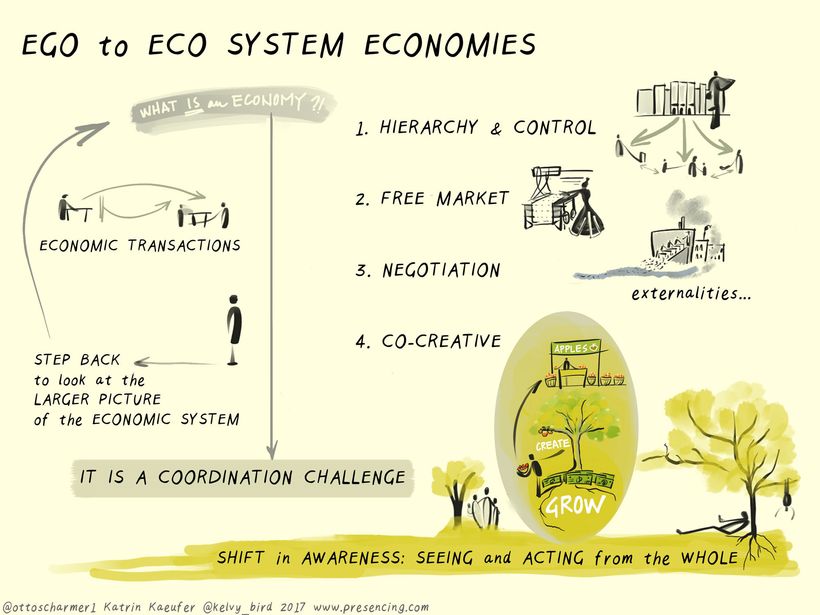 To read the rest of this article, please visit: HuffPost